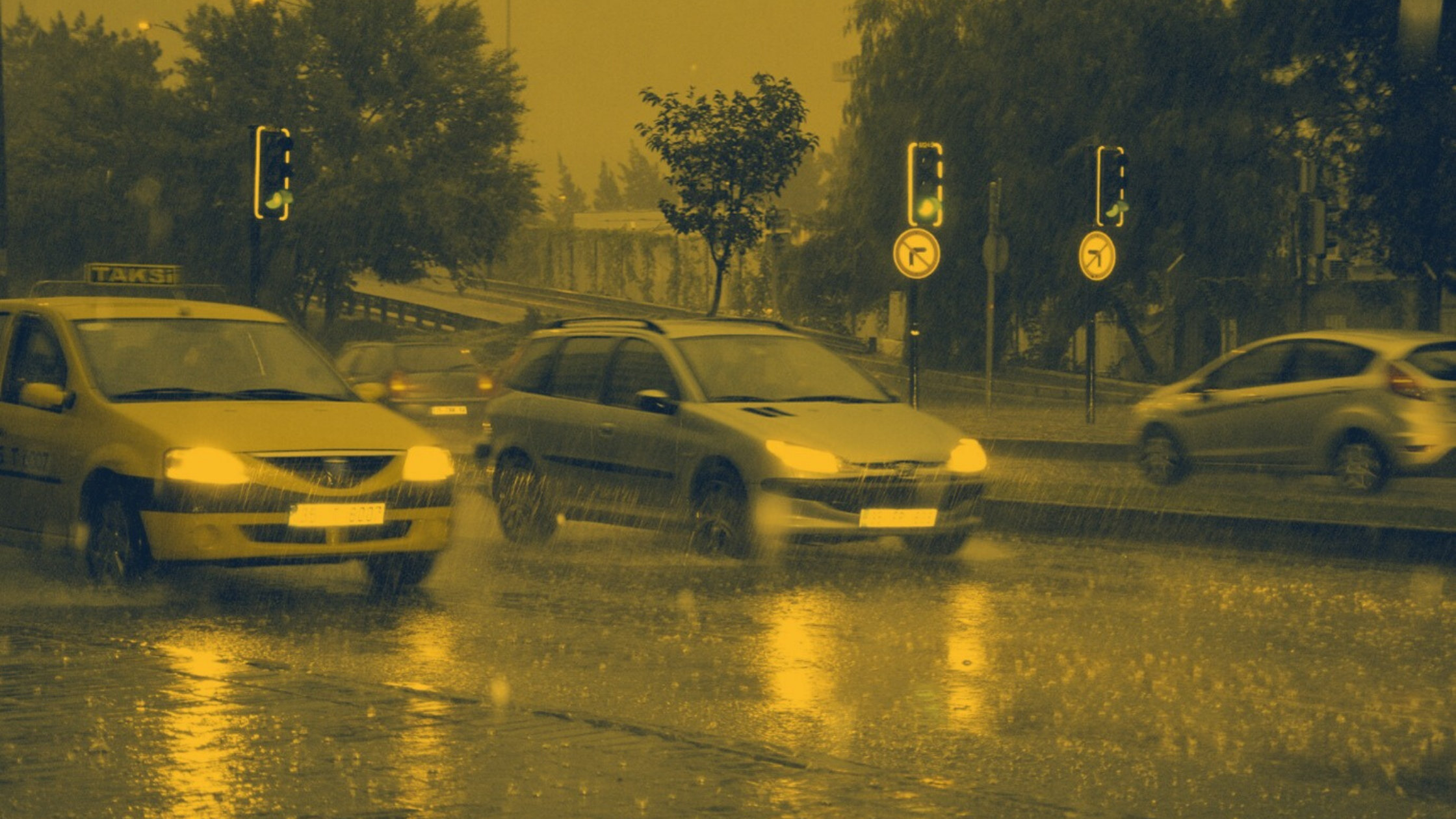 Last week the UK was battered by extreme rainfall, with weather warnings in place across the country and two months of June rainfall in only one week in some locations. This had a significant impact on transport infrastructure and services. In London, commuters were advised not to travel; sinkholes blocked lanes in both directions on the capital’s M25 motorway; major motorway repairs on the M62 in Yorkshire were cancelled; and the RAF were called in to protect communities and infrastructure in Lancashire. For many, this will bring back memories of the major disruption from storms and flooding during the winters of 2013/2014 and 2015/2016.

Although these issues cannot be specifically attributed to climate change, disruption to infrastructure in the UK (and globally) such as roads and railways is likely to increase due to extreme weather. Many organisations that are responsible for transport infrastructure, such as Highways England or Network Rail, and cities, from London to Edinburgh, have existing strategies for dealing with extreme weather and climate change adaption. Despite these, such incidents provide a major challenge for operations teams to maintain transport networks or services.

The operational impact of major disruption on transport infrastructure can be severe and widespread. This can include reduced capacity in the road network, reduced speeds, congestion, travel time delay for the passenger to reach their destination and increased accident risks. In the 2015/2016 floods (notably more severe) around 50% of the £220million road transport costs were associated with delay and disruption alone. Where vehicles are stuck in slow moving traffic, air pollution can increase from NOx, particulate matter (ie PM₁₀ / PM₂.₅) and CO₂, resulting in health impacts and environmental damage.

The impact of disruption on the transport network can be explored in a similar way whether the disruption is from extreme weather, roadworks (as explored recently by Immense for TfL’s recent Roadlab programme) or other unplanned incidents. 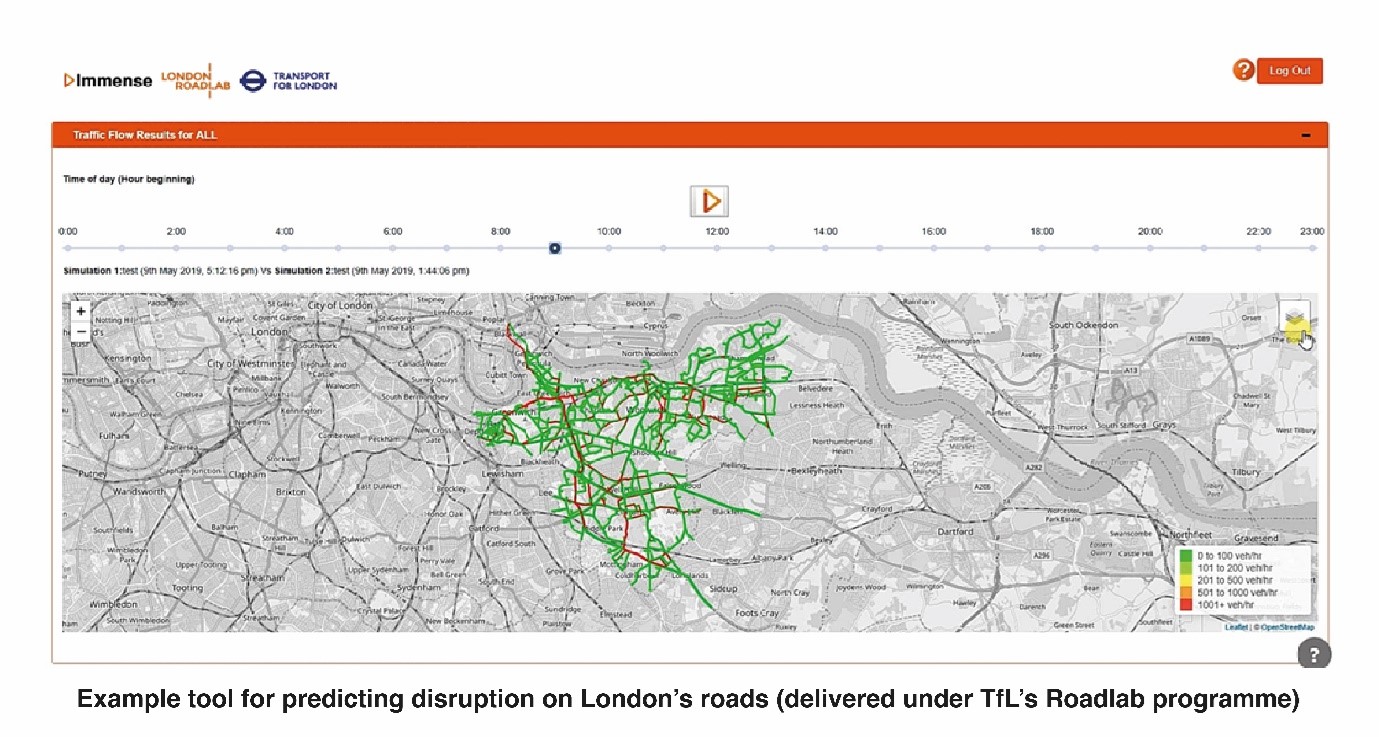 Transport models for strategic and operational environments, based on agent-based simulations, are very useful to understand the system-wide impact of disruption in granular detail and predict the future impact for multiple scenarios to plan mitigation measures. This could be looking at congestion in the next 30 minutes or 24 hours due to flooding on a motorway or major arterial road into a city. Immense Simulations have produced a range of fast (enabled by cloud computing) and easily accessible (through web-based analytics) tools for infrastructure owners and operators to view and manage transport networks. These simulations are facilitated by accurate ‘digital twins’ of cities and a wide range of data inputs that provide realistic and close to real-time representations of the movement of people and vehicles in cities. The tools can be accessed from a control room, tablet computer or the comfort of an employee’s own home through an internet browser.

With a shift towards ‘Mobility as a Service’ as well as existing taxi services, fleet operators must also deal with the impact of disruption on the road network, as operational issues affect fleet productivity, travel time confidence and customer satisfaction. Traditionally, this would be partially resolved ‘locally’ by driver intuition or ‘globally’ by the fleet operator in the control room. Unfortunately, individuals’ knowledge and experience are suppressed when facing severe disruptions that have never previously occurred. Again, Immense’s simulation modelling can help solve these real-world network challenges, by ‘fast-forwarding’ the next 30-60 minutes in a disrupted ‘world’ to guide vehicle rerouting, allocation and dispatch in anticipation of future network state. Disrupted mass transit passenger services will also yield new trip opportunities and our simulation tools enable fleets to effectively preposition services in anticipation of future demand.

Highways authorities, local authorities, infrastructure operators, cities and fleet operators will always face challenges due to disruption on their networks, wherever they are in the world. This is likely to be exacerbated by increasingly extreme weather and a wide range of urban pressures. However, new advanced technologies for transport simulation can help alleviate these pressures by creating a more resilient system and even provide unexpected opportunities.

If you would like to discuss Immense Simulation’s platform further, please don’t hesitate to reach out to Jof Ruxton, Head of Business Development at jof.ruxton@immense.ai or Luke Rust, Head of Marketing at luke.rust@immense.ai. 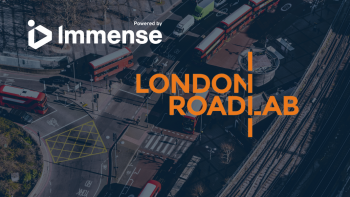 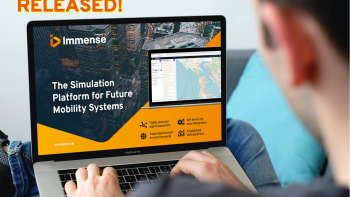 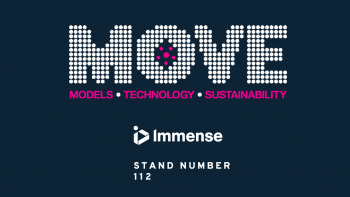